Tom Ropelewski is an award-winning writer, producer and director for film and television. He wrote and made his feature directorial debut with the Orion Pictures comedy MADHOUSE, starring John Larroquette and Kirstie Alley. Other film credits include LOVERBOY, THE KISS, LOOK WHO’S TALKING NOW and THE NEXT BEST THING.   His television work includes serving as writer and executive producer for three seasons of Paramount TV’s action/sci-fi series SEVEN DAYS.

Q: We profiled you and your documentary 2e: Twice Exceptional in our January 2015 issue.  Who did you find to be your main audience and what has the response been like?

TR:  Well, I made the film for parents like myself who were struggling with the challenges of raising brilliant kids who just couldn’t fit into the mainstream school system.  I wanted them to feel that they weren’t alone, that with time and support and the right learning environment there was light at the end of the tunnel… or at least at the end of high school.  I had a feeling there was an audience out there of parents who had skin in the 2e game.  I entered the film into a few film festivals to gain some exposure and was surprised when it started winning awards.   More people were interested in this subject than I had expected.  Many adults would come up to me after those screening and tell me that they felt that they had been twice-exceptional and would have really benefited from the type of educational model represented by Bridges Academy in the film.  Many teenagers have come up to me and thanked me for making a film about them.  After I screened at the North Carolina Conference for the Gifted and Talented in 2015, the coordinator of the Gifted Program for the entire NC public school system announced she was starting a State Task Force on twice-exceptionality and ordered one hundred and fifty copies of the film to distribute to each of her school districts.

Since then, the film’s been playing at schools, colleges and educational conferences across the country and around the world.  It’s also available free in many libraries through a streaming service called www.kanopy.com.  It seems to be particularly popular in Australia and New Zealand.  Recently it played in Tokyo where they translated it into Japanese, and in Santiago, Chile where they ran a Spanish translation.  It also has a strong audience with home-schoolers.

Q: How many people do you think you’ve reached with 2e: Twice Exceptional?

TR: That’s really impossible to say.  Some DVDs might be viewed by a single family or by an audience of 600.  And I encourage people to pass them around.

Q: Earlier in your career you were a Hollywood screenwriter and film director, mainly working in comedy.  These films are much different.  How would you say your experience helped you develop your current “voice”?

TR: Well, I think even in my early career, I wanted to make the audience care about the characters and take them on an emotional journey.  I’ve always been a good listener.  As a director, I’ve always tried to make people feel comfortable in front of the camera and that I care about their contributions.   I think that’s important in directing actors and interviewing non-actors, especially kids.

Q: So now you’ve seen the film play with many different audiences.  Do you get different responses?

TR: Actually, no.  As a filmmaker, I structured the film to take the audience on a particular journey.  I knew the spots that would get laughs or would move people.  So the film basically plays the same with all audiences.  The only thing that might vary is the degree of those responses.  However, what has changed since the early screenings is the audience’s understanding of the concept of twice-exceptionality.   At first many people had never even heard the term “2e,” although they had kids who fit the description.  Now at the screenings there are many more people who arrive informed and are already actively advocating for their kids.

Q: Why did you decided to make a sequel?

TR: While I was travelling around the country with the first film, I was gathering intel. What questions did people have after watching it? Was anything confusing or unclear? What did they want to know more about? Usually the Q&A sessions lasted longer than the film itself.

Some of the most persistent questions I got were from teachers, often from public schools, who wanted to know how they could be more effective with their 2e students.  They were often frustrated – they knew they were failing some of their brightest kids.  The first film focused on the personal stories of a handful of kids and their parents, and their journeys through middle and high school.  The teachers in the audience wanted to know more specifically what goes on in the Bridges classrooms.  What sorts of strategies did they use to engage these kids, and how could they apply those strategies in their own classrooms?

So I went back to Bridges Academy and talked with headmaster Carl Sabatino about the possibility of a follow-up film. This one would focus on teachers, the issues they face on a daily basis with 2e students – like social anxiety and perfectionism — and how they try to solve them.

Q: So what’s the most important thing you’d like to convey to your audience with this film?

TR: Well, I think the biggest revelation is that the strategies used by teachers at Bridges can apply to any learning environment and benefit every student. Of course, small class size helps, but it’s not the biggest factor.  I think the key is in Bridges’ philosophy of strength-based, talent-focused education, where they identify and teach to the strengths and interests of a student and help them address their challenges without defining them by those challenges.  Because who wants to be defined by what they can’t do?

Q: What’s your biggest ambition for this new film?

Q: I’d love to screen it for Betsy DeVos.  If she’s looking for outside-the-box solutions for our broken school system, I’ve got lots of ideas for her.

TR: Not yet, but I wouldn’t rule it out.  Let’s see what kind of questions this film generates.  In the meantime, I’m putting the finishing touches on a companion piece to 2e2.  Last fall Bridges hosted a symposium entitled “Vision and Leadership in 2e Education.”  As part of that event, Susan Baum and Robin Schader of Bridges’ 2e Center for Research and Professional Development conducted a day-long workshop in which they introduced a suite of tools they’ve designed to help teachers quickly identify the strengths, styles, talents, and interests of students, and then integrate that information into the decisions they make about curriculum.  We taped the workshop and are editing it into six short episodes.  These will be available, along with the suite of tools, sometime this fall.

Q: One final question – what’s the most rewarding part of being one of the voices of the 2e community?

TR: That’s easy – when a parent or student tells me they feel less alone after seeing my films.  That means everything to me.  This is by far the most rewarding work I’ve ever done.

As the parent of a “twice-exceptional” teenager (he’s intellectually gifted – that’s the first exception – but with a learning difference – ADHD – that’s the second), I know first-hand about the challenges of trying to understand and nurture a child who at one moment seems wise beyond his years and the next can throw a tantrum like a much younger child. I know the heartache of speaking with school officials who acknowledged that my son was brilliant but unmanageable.

But I also know the thrill of being in the presence a unique and lively mind, one that has little patience for a three-minute pop song but can sit through the entirety of Wagner’s Ring cycle and discuss it excitedly afterward. To this day, he’s never seen the Star Wars trilogy; at age seven he got through about ten minutes of Episode 4 before turning off the TV and running to his room to start building his own Imperial Fleet.

I admit my son’s a challenge, but why can’t everyone see the same brilliant kid I see? Why do they always focus on the problems instead of the gifts? And why can’t my son just go with the flow once in a while? Why does he always have to make everything so hard on himself by insisting on doing things his own way?

The simple answer is that that his brain is “wired” differently. Basic executive skills (like remembering to turn in his homework on time) that come so easily to other children are real challenges for him. But studying graduate-level molecular genetics in tenth grade was a piece of cake.

Although the concept of twice-exceptionality has evolved over the past half-century, I hadn’t heard of it until I discovered Bridges Academy. I had no idea that there was a small but passionate network of educators around the country who were developing curricula that focused on the strengths of these unique students while also helping them address their challenges. Most importantly, these teachers were helping students identify and develop their talents and passions. They were defining these kids by their strengths – what they can do, often brilliantly – instead of by their weaknesses, which is the predominant approach of the American public school system.

No federal agency or organization currently gathers statistics about giftedness, but the National Association of Gifted Children estimates that there are approximately three million school children – about 5-7% of the student population — “capable of high performance” and “in need of services or activities not normally provided by the school. “ Almost all funding decisions regarding gifted education are generated at the state and local level. While “No Child Left Behind” was designed to address students performing below proficient levels, gifted children – and especially the twice-exceptional – are usually left out in the cold.

Navigating adolescence is challenging enough for anyone, no matter what path to adulthood you find yourself on. That challenge is compounded greatly for the young person who finds himself on a path which few, if any, have forged before. Parents and teachers are equally lost when trying their best to nurture and guide them.

It is my hope that 2e: Twice Exceptional will expand the national dialogue about twice-exceptional education and shed light on educators who are developing insightful, effective programs to engage these idiosyncratic kids who may indeed grow up to change the world. 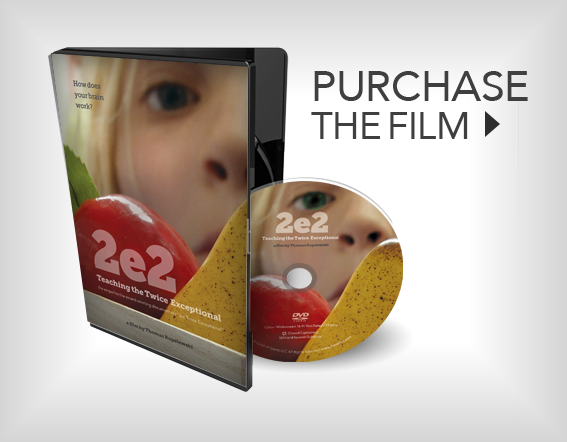 "Essential viewing for anyone interested in understanding where our next generation of game-changing outliers may be coming from."
- The Bridges Academy